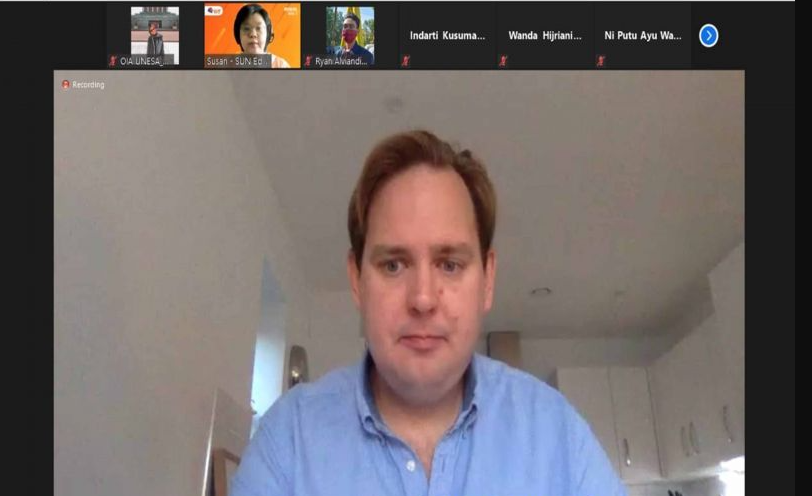 Surabaya, October 15th, 2020. Office of International Affairs Surabaya State University, in collaboration with the University of Southampton and SUN Education held a Guest Lecture with the topic "Why Planning for Your Customers' Irrationality Is Probably Your Most Rational Strategy. "At this event, the main speaker was Dr. Rob Angell, who gave lectures on various marketing methods to attract customers. Dr. Angell also discussed customer psychology and several other business theories. Through online classes, discussions, and case studies, students have expected to determine the beneficial aspect to attract customers' interest in a business. Opening remarks from Mr. Asrori, S. S, M.Pd, as the Head of Office of International Affairs Unesa, was promptly followed by a presentation about customer psychology by Dr. Rob Angell. Dr. Angell has worked with some successful companies such as Angell Sloan Research (ASR). Dr. Angell explained that several interesting theories greatly influence decision-making in the business context, such as the Contagion effect, the Ikea Effect, and The Mere Exposure Effect. These three theories are widely used in the business sector to attract customers. Dr. Angell elaborated that the Contagion Effect is when we have confronted with items, places, and spaces that others have already contaminated by others, we instinctively remove ourselves from such situations. Meanwhile, the Ikea Effect means we give high value to something that we make or build. Finally, the Mere Exposure Effect suggests that people tend to prefer people or things simply because they are more familiar with it. In the business context, Pictures are very influential in attracting customers. After the brief, yet impressive lecture section from Dr. Rob Angell, Ms. Lizzie Eyres, a representative from the Overseas Division of The University of Southampton in Southeast Asia, gave a short explanation about The University of Southampton. She talked about the history, facilities, and student community at the University. Ms. Eyres hoped that Indonesian students, Primarily from Universitas Negeri Surabaya, would be interested in continuing their studies at the University of Southampton. This joint event by OIA Unesa, the University of Southampton, and SUN Education started at 13.00 and ended at 14:00 WIB.